Third Act Launches First of Its Kind Marketplace for Theatre NFTs, Built on the Hedera Network 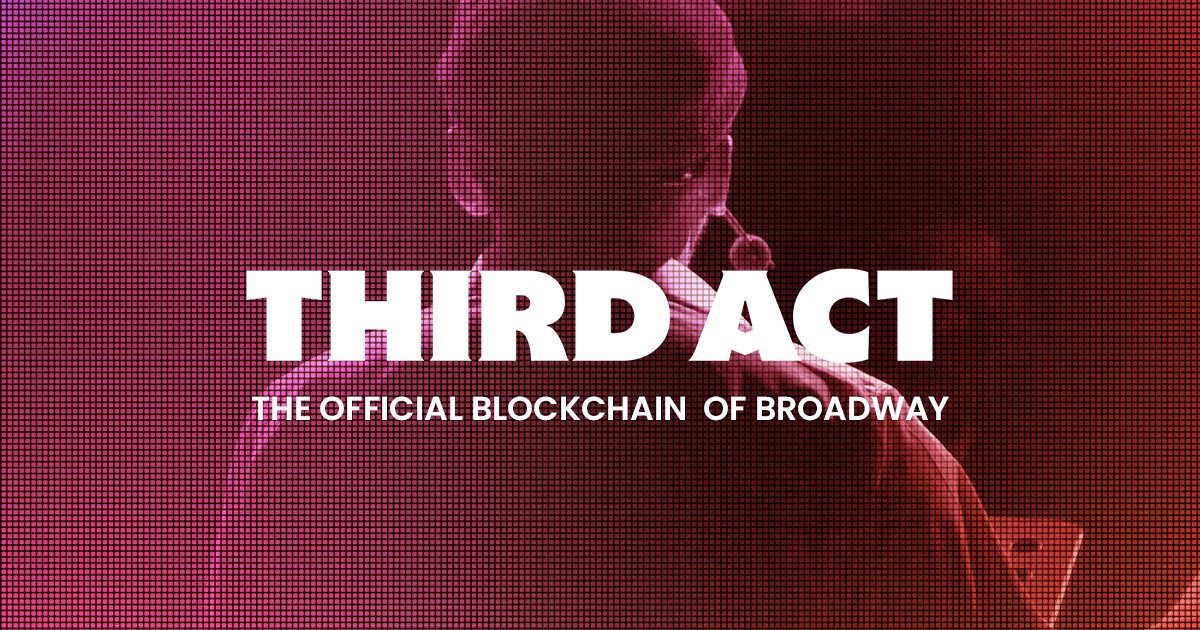 A marketplace+service approach aims to revitalize this unaddressed industry.

NEW YORK CITY, NY— The first-of-its-kind NFT marketplace for the theatre community: Third Act, has just launched. Built by members of the Tony Awards® Nominated and Drama League Winning Producers of Burn This, Third Act “provides a new form of monetization for theatre productions via Blockchain. Third Act launched the marketplace on the Hedera network, the most used, sustainable public network for the decentralized economy. Through NFT creation and issuance using the Hedera Token Service, productions can offer theatre-goers the next generation of authentic digital merchandise.

“The ‘Show’ is extending beyond the stage, into social media, streaming, and now, blockchain. We are very excited to bring a new form of monetization to theatre productions.” says Eric Neal, Founder of Third Act. “Distributed ledger technologies and blockchain have quickly evolved from a somewhat opaque territory into what will become the future of collectibles. The NBA launched their Top Shot program to great fanfare, Beeple [the digital artist] recently sold one of the highest paid-for art pieces at Christie’s in New York, and we are excited to bring the spirit and beauty of theatre to people all over the world”.

Tony Award® nominated and Olivier Award-winning Producer, Oliver Roth (Slave Play, Sea Wall/A Life, The Inheritance) has already signed terms to use the service in his latest production: Herding Cats. Herding Cats had six live performances at London’s Soho Theatre last month and will be streaming online from June 7-June 21 on Stellar Tickets. “We are very excited to collaborate with Third Act to digitize merchandise for the first-ever transatlantic, in-person and online production, Herding Cats. We believe that non-fungible tokens on the Blockchain will play a critical role in merchandise and collectibles in the future of Broadway productions.” said Roth. To commemorate the event, Third Act is issuing a free NFT to all who attended and watched online, get yours here.

NFT or “Non-Fungible Token” is not a new term. It means any asset that cannot be exchanged for another asset of equal value. Its usage on the Blockchain, a digital, uneditable, global record of asset ownership, is however. And that evolution has quickly brought NFTs to a new and large fanbase. Third Act produces custom code using Hedera Hashgraph to irrevocably create NFTs, while assigning ownership and royalty rights), minting (the process of officiating any asset as original), and auctioning (the process of selling the asset to the highest bidder, facilitating the sale, and distributing the revenue). They can also produce the digital assets through a design agency partner.

Neal noted, “we see the NFT marketplace as a tool for theatre productions to build a new revenue stream that continues to pay royalties, even when that asset changes hands. These digital assets can appreciate in value like a piece of fine art. Nothing needs to be shipped and its ownership is irrefutable.”

The platform was designed to be as easy as eBay, but way more fun. When first vetting technology partners, Third Act reviewed the usual suspects but many came with big transaction costs and long wait times. Through its partnership with Hedera, Third Act offers instantaneous transactions that cost less than 1¢ USD, allowing for a much more accessible experience for theatre-goers.

“Third Act has done great work building the right tool to meet the needs of the theatre community,” said Christian Hasker, CMO of Hedera. “They’ve identified a way to help recoupment for every production, and drive real value for this industry. We’re especially excited to collaborate with accomplished storytellers to use the Hedera network in unforgettable ways.”

Hedera Hashgraph is the most used, sustainable, enterprise-grade public ledger. The decentralized Hedera network offers stable governance with no forking, low and predictable transaction fees, fairness, built-in compliance, real-time settlement, and sustainable energy consumption — all of which are driving massive adoption. Hedera Hashgraph has the most decentralized and transparent governance model, led by the Hedera Governing Council, ensuring the reliability of the network. Hbar, the native cryptocurrency of the Hedera network, is used to protect the network through proof-of-stake and power decentralized applications.